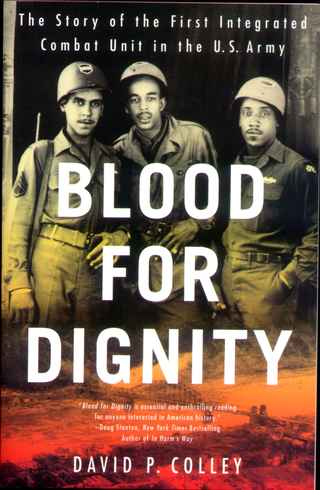 Colley does an excellent job of portraying the dual war these men were fighting, on the one hand against the Germans and the other against racism. Their courageous performance not only contributed to victory but would lead to the integration of combat units during the Korean War and full integration shortly after the war."—Library Journal

"This compact and clearly written book adds detail to the history of African American soldiers in World War II . . . Based on comprehensive interviews and use of written sources, the book will be steadily engaging for anyone interested in WWII and integration history."—Publishers Weekly

"Drawing on interviews with the survivors, journalist Colley paints a 'Band of Others' picture of the first integrated unit to see combat in WWII. In 1941, he writes, blacks were simply not considered reliable combatants by the white military hierarchy. Generals may have believed that integration was coming, but none were about to undertake 'a social experiment' in the middle of a war whose outcome was still in doubt. The result, stresses Colley, is that African American units were segregated from induction on and given inferior training that all but guaranteed the conventional expectation. The brass planned to deploy most black soldiers behind the lines as cooks, MPs, or auto mechanics, but manpower demands by early 1945 dictated another tactic: African American platoons would be mixed in at the front with infantry units struggling against a Wehrmacht now fighting on its home soil . . . [A] revealing look at yet another facet of the army’s racial politics."—Kirkus Reviews

INTRODUCTION FROM
BLOOD FOR DIGNITY

In early March, 1945, more than 2,000 African American infantrymen entered the front lines in Germany to fight alongside white soldiers in infantry and armored divisions engaged in the final battles of World War II in Europe. Today black combat troops go unnoticed in an American army that has been integrated since the 1950s.
But in 1945 the appearance of these black volunteers in all-white fighting units was a radical departure from military practices dating back to the birth of the nation. For 162 years, from the end of the Revolution in 1783, until the last three months of World War II, blacks served principally in service units and the few who fought were relegated to segregated combat units. The psychological impact of this exclusion on black men was profound. They were deprived of the fundamental right to be men among men.
In the closing months of World War II the army took the first meaningful steps to integrate its combat units by calling for black volunteers and assigning them to various divisions in the European Theater. The high command originally planned to integrate the black infantrymen individually with whites, but, because of feared political repercussions, stemming from long-standing policies of segregation, they were formed into all-black platoons that were integrated into white infantry companies. In March 1945, the first of 52 platoons, comprised of about 50 men each, went into action along the Rhine as the allies began their final push to defeat Nazi Germany.
American military doctrine had long held that blacks were inferior fighters who fled under fire, and who lacked the intelligence, reliability and courage of whites. The combat record of the black platoons in March, April and May 1945, dispelled this notion. The majority of black troops who fought in the integrated infantry and armored companies did so with an élan and courage that deeply impressed their white superiors and comrades. In some cases white officers regarded the black infantrymen as superior fighters to whites. One former white soldier who fought alongside blacks in K Company, 394th Infantry Regiment, 99th Division, characterized these African-American warriors as “courageous to the point of foolishness.” He was not alone in his observations. A white officer saw them as more aggressive than whites in combat, more willing to kill or be killed.
After the war the army conducted a study of the performance of the black volunteers entitled “The Utilization of Black Platoons in White Companies.” In interviews with 1,700 white soldiers, including eighty-four percent of the platoons’ officers, those queried said the blacks had performed “very well.” There was not one instance in which the performance of black troops was rated as poor.
Another surprising aspect of this post-war study was that the color line and racial enmity that had existed between whites and blacks in civilian life, and much of army life during World War II, disappeared at the front. Relations between whites and blacks in combat units were judged to be “excellent.” By war’s end many of the white infantrymen and officers who served with blacks “endorsed the idea of having colored soldiers used as infantry troops.”
After VE Day, however, segregation once again prevailed in the American army. Most of the black volunteers were separated from their infantry and armored divisions and returned to segregated service units prior to being shipped home. In at least two cases black volunteers mutinied and demanded that they be allowed to remain with their infantry units. One incident required the intervention of Brig. Gen. Benjamin O. Davis, America’s first black general, to defuse the crisis.
The pressure for equality in American life following World War II proved irresistible and, in 1948, President Harry S. Truman ordered the integration of the armed forces. It would be a number of years before Truman’s executive order was fully implemented, but the American army, particularly its combat formations, became fully integrated by the mid-1950s. Integration in army combat units began in earnest during the Korean War. Ironically, during the Viet Nam War there were complaints of disproportionate numbers of blacks in the infantry.
It is hard to quantify the impact of the black platoons on the later integration of the American army. Did it speed the process of integration in the military and later in civilian life? Many of the black platoon members believe their service helped the cause of racial equality. Post-war commissions studying the problems of segregation in the military looked to the black platoons as examples of how integration had worked in the U.S. Army.
Blood for Dignity is the first chronicle of the black platoons told mostly by surviving members of 5th Platoon, K Company, 394th Infantry Regiment, 99th Infantry Division. The story of the “5th of K” is supplemented by accounts of black platoon members in the two additional regiments of the 99th, and in other combat divisions. The 5th of K went into the line on March 12, 1945, and was put to the test in its first hours of combat. The platoon was engaged in both heavy combat and in mopping up operations in the final months of the war.
While focused mostly on three months of combat, the story of the men of the 5th of K transcends war. It also relates the story of their courage and determination to achieve success and acceptance before and after World War II. Platoon members began life in a segregated culture that relegated them to the status of second class citizens. Through the post-war years they struggled and persevered and today many are successful and aging warriors of the Great Crusade. Above all they are proud African Americans.
This is the story of the men of the black platoons, mostly in war, but also in peace.